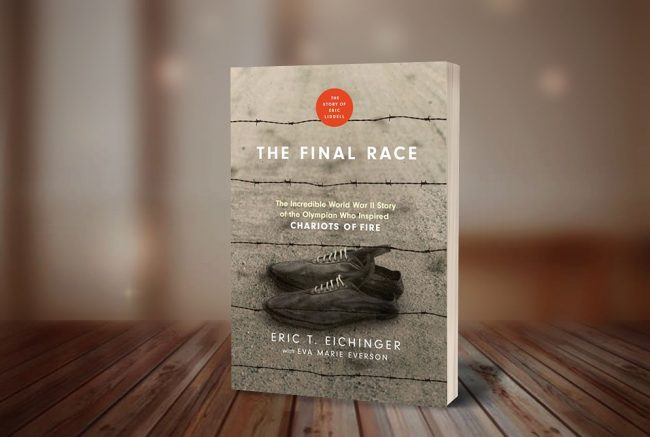 Eric Liddell was a Scottish track & field athlete who broke the world record of 400 metres at the 1924 Olympics in Paris. He was also a devout Christian: a missionary with a talent for running, rather than an athlete with a strong religious belief. One renowned example of this is his refusal to run the 100 meters and the 400-meter relay in Paris, as the heats would be held on a Sunday.

Liddell was born from Scottish missionary parents in 1902 in China, where he returned after the Olympics to also become a missionary, and it was there that he died in 1945 in a Japanese internment camp.

While Liddell’s participation in the Olympics was famously told in the Oscar-winning movie Chariots of Fire, a script telling the story of the second part of his life is currently in development in Hollywood. The movie – whose title will be The Greater Prize – is based on a Liddell biography called The Final Race, written by Eric Eichinger and published by Tyndale House. (The Final Race is also the title of a Chinese-made sequel to Chariots of Fire, but it has nothing to do with Eric’s work.)

In this interview, Eric talks about his experience of writing the book.

Eric’s background is not a minor detail in the story of The Last Race.

I’m married with three children and I’ve been a pastor for the Lutheran Church for about 13 years. As a college student I was a varsity athlete at Michigan State University, where I ran track and field. I also have a theatre background. I enjoy telling stories and use a lot of storytelling techniques and humour when I write sermons, preach, or teach Bible classes in schools.

When Chariots of Fire came out, I was just a little kid, but I saw a lot of similarities between Liddell and myself: we share the same first name, he was great at running, and was also a devout Christian. That just really got me excited and inspired to sort of emulate his life and his story. He ended up becoming a missionary in China and I also lived there for two years. Although I ended up doing very different things, our lives kind of mirrored each other. I wasn’t really trying to do that, but God has sort of navigated that. It was very inspiring for me.

It was in China that Eric first had the idea to tell Liddell’s story. His first thought wasn’t for a book, though.

When I was living in China, I took a trip to the camp where Liddell died. It was a difficult quest to get there and back. And then a friend of mine noticed that the story of how he inspired me to the point of going on this pilgrimage was really interesting. At that time, I was planning on going to seminary to study to become a pastor, and Liddell had also done that. When I was there, I started drawing on all of these passions in my life: running, theology, my missionary experience and creative background and wrote a screenplay for a sequel to Chariots of Fire.

Just like a manuscript needs a publisher, however, a screenplay needs a producer. Hollywood was the natural place to find one.

I was throwing stones at the windows of Hollywood for a number of years, but I had no contacts there. And then I met up with some professionals who were interested in me and my story. God kept opening doorways for me, so I kept going through. Eventually, I was able to work with Howie Klausner, and he’s sort of taken me under his wing. Howie has been a professional writer and screenwriter in Hollywood for 25 years. He’s worked with some A-list people, including Clint Eastwood, writing, rewriting or doing polish work for many movie scripts. He loves Liddell’s story and also happens to be a Christian. We’ve enjoyed being dads, writers and friends. He’s 10-15 years ahead of me in life, but he’s become a mentor figure and helped me to get this project off the ground.

The next step for Eric was to hire a literary agent: that’s when the idea of a book was really born.

My literary agent said I’d have to write the novelization of my screenplay and turn it into a book. So, I did just that and we took it to publishing companies, until we found Tyndale House. They liked what I had written and the whole movie possibility, and asked me if I could write a biography about Liddell, and here we are.

To sum up: first came the screenplay, then its novelization and eventually a publishing deal for a biography. But what happened to the first two projects?

They’re still very much alive. Tyndale House said that if I could get a movie deal in place, they would publish the novelization. So, I’m working on a screenplay with Howie, trying to get that part sorted. It’s just very difficult getting publishing deals, and it’s extremely difficult getting movie deals. I’m a full-time pastor as well as a husband and a father. But that gives me joy.

That’s the story so far. About the book now: what was the writing process like?

I was assigned an editor and a secondary author, Eva Marie Everson. I would write the chapters and send them to her and she would add a little more flavour and structure. Then, they would come back to me and I would maybe tweak them some more and send them back to her. It was a long, long process of reading and rereading, and omitting and cutting and adding. Overall it took about a year and a half from when we signed the contract to when the book launched.

The research part was not only about reading, but also about travelling and meeting people. Eric’s similarities with Liddell also helped in the writing process.

We met Liddell’s daughters in Toronto. It was wonderful to get a couple of extra stories that hadn’t been written before. Then we got to go over to Scotland to visit Liddell’s centre in Edinburgh. It’s a phenomenal well of resources with different photographs and all of his medals. We also got to talk to a couple of his distant relatives who are still there.

They always say you should write about what you know. I was able to write from Eric Liddell’s point of view, having sort of almost literally walked in his shoes. I could speak with authority about what it feels like to be a teacher and a Christian in China. Also, I ran at very high level so I was able to speak with authority on what it’s like physically and psychologically.

When Tyndale got to review the manuscript, however, their feedback was not what Eric expected.

After reviewing the manuscript for a month, Tyndale came back and said they wanted more of Liddell’s adult life in the book and less of his years as a child and a young boy. So, we had to throw away about a quarter to a third of what we had written and start over again. It was tough to take that news in and absorb it. You think you’ve crossed the finish line and the book can finally start taking off, just to find out you’re only about halfway there. But in the end, I’m happy with what we have produced.

As a non-professional author, Eric needed to find a way to fit writing into his schedule.

I used to enjoy running and working out on my own, and I had to sacrifice that. I would get up at about five AM and write for usually two hours. It was really enjoyable to have some quiet time in the dark, with a big pot of coffee and my dog, who would get up and sit with me.

However, this image of the author typing away in solitude is just a small part of the whole story.

Writing this book was more of a collaboration with other people than it just being you as an individual. I did not get to choose the title of the book, or the cover artwork. I worked with another author, an editor and a copy editor. And then I had a literary agent, and different marketing people were also involved. It’s a really vast project of people that have their say in what you’re doing. Sometimes it’s easy, and sometimes it’s challenging, as you have to sacrifice things that you don’t want to sacrifice.

What kind of advice would he give to a first-time author?

The answers to those questions might not be satisfying enough to get you through the months and months when you are alone, early in the morning, or late at night staring at that empty page. Because writing a book is a marathon, it’s a big, long commitment. So, you need to have that fire in the belly and know that you want to do this because you absolutely feel that the world needs to hear the message that you want to share. If you don’t feel that answer in your innermost being, then your motivations might be a little skewed, and you might not have enough energy and gas in the tank to get you to the finish line.