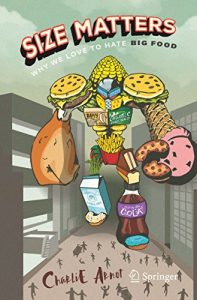 When you are a thought leader with an idea that is not quite mainstream yet, then a book is one of the best ways to make it known to others.

A good example of that is Size Matters: Why We Love to Hate Big Food by Charlie Arnot, published by Springer. Charlie is the founder of Look East PR and the Center for Food Integrity, an international non-profit. In this interview, he talks about how the book was born.

The idea for Size Matters came from Charlie’s 10-year experience as VP of Communications and Public Affairs for a large agribusiness company.

When I was in the corporate agribusiness, we relied a lot on science and economic information to try and defend our interests. And what I discovered was that it no longer worked. So, I decided to launch a business and then a non-profit focused on building trust, which is much more effective in today’s environment than simply defending a position.

As I worked through the non-profit and spoke at conferences about building trust, I often met different individuals who wanted to learn more about my approach and philosophy and would ask me if I had any additional information that I could share.

As a result of that, I thought I’d like to distil the concepts that we communicate and the work that we do into something that would be more easily shared with others. That became the concept of the book.

Once he had the idea for the book, there was no knocking on publishers’ doors, though. It was the publisher that came to him, once again thanks to a referral.

That process where I began capturing ideas and concepts took eight or ten years, until Springer contacted me and asked if I would be interested in writing the book.  I was referred to them by another author, who recommended me based on my speaking and writing.

Armed with a journalism background, Charlie wasn’t new to writing. As he admits, however, writing a non-fiction book is a different story.

I already had an idea and a concept, so naturally I said yes. I had a great deal of experience with different kinds of writing styles, so it all seemed like it was going to be very simple, but I really didn’t have a firm grasp on the amount of time or energy it was going to take to structure a book. It’s very different from a news story or an article or a blog.

The way he describes the process may as well be a primer on how it works.

After that, I looked for analogies, illustrations, stories, or real-life examples that would help me bring that to life.

Finally, I started to weave all of that together in a coherent narrative to communicate my point of view in a way that people would be interested in reading.

Structuring your ideas and finding a way to explain them to other people is the best thing about writing, if you ask me. But then there’s more to writing a book than that.

I had never worked with a publisher before, so it was an interesting process of understanding the mechanics and learning what was expected.

One thing I had failed to recognize was getting written permission from everybody that we spoke to, and those that we used quotes from, to be included in the book.

The other thing was style. As a US journalist I was trained on AP, but the publisher used a very different one. While I was revising the manuscript with the editor, at some point I realised that I was really correcting style differences, not the content itself.

If I had to do it again I would spend more time really trying to understand the process, in terms of what it takes to work with a publisher and what they’re going to expect. I would also probably spend more time upfront working on the framework and outline.

There are two other interesting takeaways from Charlie’s experience of writing Size Matters. One: when you find a publisher, your idea for a book starts to become real, not only because a publisher has the means to launch it on the market, but also because it’s the moment that you start having real deadlines.

Writing a book is one of those things you’ll never get around to until there’s a deadline or someone that you’ve made a commitment to.

Because I had a full-time job. I didn’t have the luxury of, say, take three or four months off and dedicate them to writing a book, so it was a matter of doing that on nights and at weekends. Overall, it took about two years to wrap the whole thing up.

Two: quite often you start with a point of view you want to explain, and as you do the research to build a case for it, that very point of view evolves.

Writing the book was an iterative process, where I began with one concept and then that got modified a bit as I was doing the research and talking to people. I think that’s healthy, because it allows you to continue to focus and sharpen what you want to communicate.

Finally, the part with advice to first-time non-fiction authors. Once again, it all starts from passion, but there’s more.

Make sure you’re passionate about what you want to write. Your passion is what will drive you through the obstacles and overcome all the challenges that you will run into.

And then really spend some additional time upfront understanding the process, putting together a very detailed outline. The more specific my outline for a chapter was, the easier it would be to write it. Getting some feedback about it, either from colleagues or the editor or somebody else is very helpful, because it may be completely intuitive to you, but you may not have articulated it in a way that it makes sense to others.